You are here: Home / Wisdom from Sri Sri / Another recent Q&A from Guruji 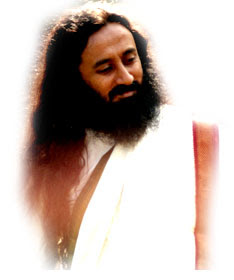 It’s always the same — I think about so many things to share with you, and find myself going back to the Master’s words. It’s interesting to know how amazingly contextual His statements are; one can’t hang on to something He said twenty years or twenty days ago and try to “massage” it as gospel truth, nor would He expect you to. I look to Him to give me a fresh, current perspective which will have a direct bearing on my experience of reality at this moment, which is dynamically evolving. At the same time, the basic principles are unchanging — as these sutras are independent of time and place — they hold their relevance through the ages. The beauty is that they are given to us as easily applicable principles which evolve to fit our ever changing contexts. I said the other day — “Guru ke paas tumhe kuchh baasi ya jhootha nahin diya jayega” (The Guru will not give you something stale or chewed by others) — it is always fresh, relevant, personal, immediate, urgent and applicable!

I have always taken His suggestions and directly applied them to various situations in my life, and there has not been a single instance where they have not yielded results. I know many people who “hold on to the sutra” ie take guidance from the Guru but don’t apply it in their lives; thus neither their situation improves and above all they have a delusion that they are actually following the knowledge, leading to further disillusionment! 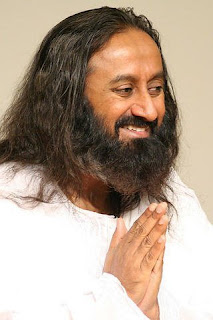 Sri Sri Ravi Shankar: Dharma and sanga. Our innermost nature is what dharma is. Yes, our innermost nature is dharma and sangha is our association, our environment. So events and attitude are influenced by only two things. The first is by your own true nature and another by your environment, the people whom you are with, you know. In a group if someone says, ‘Come lets go and have a drink,’ we will say, ‘Ok, lets all go.’ We will go. In a group if someone starts talking negatively, slowly another person will join a little later, then the third and the fourth. Soon you’ll find that everybody starts talking negatively – this is the influence of the group A child is influenced upto 25 percent by the environment, by the friends in the environment and the school they grow up in. Another 25 percent is from the parents’ genes and tendencies. The next 25 percent is their own originality, their karmas, their samskaras, the impression that they come into this world with. The remaining 25 percent is through their own self-effort and their understanding. So parents have got only one-fourth influence on their children. Only one fourth. Similarly, our sangha which means our association has an influence on us. Usually what we call sangha is a group of people who are on the spiritual path. People on the spiritual path can help you with that much-needed energy, biodiversity energy for you to move on that path. That is why when you sit and meditate in a group, it is better than when you are alone. How many of you feel that way? In a group you feel like doing yoga, pranayam, even service activity. When you are alone, you get tired. You don’t feel like doing it. But few of you join together and you do a lot of work. If you have to wash the dishes alone, you will feel so bored. But if 7, 8 or 9 of us are washing the dishes, time just flies like that. You don’t feel tired. I have told you don’t feel exhausted isn’t it? How many of you have this experience? At home if someone is asked to wash that many dishes, you would crib. And here you do it with the smile, you do it happily joyfully. So sangha can or the group sangha can help you move up in life. It puts you in touch with the dharma; and sangha only happen with the enlightened. That’s why Lord Buddha said Buddham, sangham and dharmam. Three things – the enlightened one, the company of people and your true nature – all these things important and they all are one and the same. 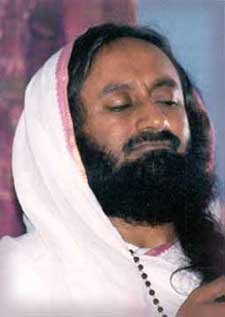 Q. Guruji is there any wrong time for meditation? Is it ok to meditate any time?

Sri Sri Ravi Shankar: You can meditate any time when your tummy is not full. When you have eaten, you are full. When you sit for meditation at that time, that is not good. Either you will not have meditation, you’ll fall asleep or you’ll have indigestion. There will some difficulty in metabolism.

Q: Why is there is a rift between migrants and local people?
Sri Sri Ravi Shankar: Rift between the migrants and people living there… one of the reasons is that the migrants are not mixing with the local people. They remain in their own community and campus. They don’t adopt the country they are in. This is a big issue. That is going to keep people separate. There is an old saying, ‘When in Rome, do as the Romans do.’ So if you are in a country, you should adopt that culture, you should be with the country, flow with the norms of that country. This is essential for migrants to know and understand. Secondly, the fear. Migrants fear that they will lose their roots. This they need not do. They should strengthen their roots as well maintain their original customs – language, culture, religion, tradition. That is fine. They should do that. On the other hand, there is much awareness about cultural diversity. There have not been many festivals which integrate all kinds of people, of all different cultures, civilization, religions. This multi-cultural events, multi-religious events need to happen more often. That would bring people together, their hearts and minds together. 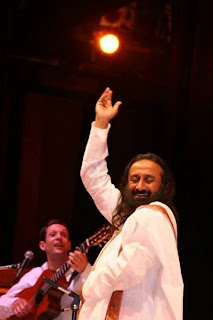 Q: Guruji our politicians aren’t any good. How can you change corrupted ones like the one in my country?

Sri Sri Ravi Shankar: Well. I will leave that question with you. You may get some ideas. Share them with me too! We have to work on this issue. Politicians have lost the sense of belongingness with people. It has become another industry. Politics has ceased to be a place for responsibility and caring and protection of people’s welfare. Rather it has turned out to be self-aggrandizement, an industry of power and position and money. This has to change. You know, politicians will have to realize that they are servants of people. They have a responsibility. There are some very good politicians. Not that we should put them all in the same basket. But those corrupt politicians are the one we really needed to address. That can happen only through education and rising awareness of human values among them. I am very much concerned, especially about Africa, where people have very little to eat. The country is really going down and the politicians of Africa have hoarded billions – $280 billion – in a bank in England. When I was speaking to politicians at the European parliament, they told me that, ‘Guruji, we have good news. We have sent $79 million back to Africa to the people there because it’s the people’s money. But it’s not sufficient. It’s only a small portion of what presidents and prime ministers of the continent of Africa are holding there. Similarly, Indian politicians are holding huge amounts in Swiss banks. But it’s all been hushed up. There needs to be a wave of spiritual awakening, moral and spiritual awakening in the whole world, especially in this field. Only then can this be corrected So, it’s a big task. Everybody has to work for it. We need politicians like Gandhi and Martin Luther King who are spiritual and who care for people to uphold ideals in society. Isn’t it? 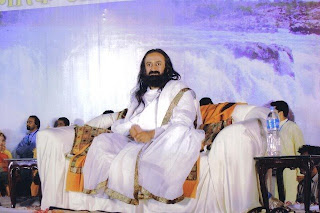 Q: Dearest Guruji, can you please speak about guru and tatva?

Sri Sri Ravi Shankar: There is only one air, one sun, one earth and one moon. and similarly one consciousness. In the inside of us, the consciousness which is wisdom, which is light is gurutatva. Tatva means principle. To begin with, the five tatvas are earth, water, air, ether and fire. These are five tatvas and then there is the mind, intellect ego. Then there is the maha tatva which is beyond the ego. The one who has gone beyond the ego is called Mahatma. Finer than the maha tatva is the guru tatva. The guru tatva is that principle of discrimination, of knowledge and when it dawns inside you, that is guru tatva. In knowledge then you have no dearth for anything. Life’s mission is complete. Guru tatva always brings joy, freedom from misery and upliftment of the consciousness.

Q: Dear Sri Sri, please guide me on how I can serve humanity. Lots and lots of love.
Guruji: Yes, come join the band wagon. Come join and think about what we can all do together. See alone when we do it, individually, it is a small effort. There is not much result. In fact, we burn out, we get tired. But as a group we can do a lot. Ok?