You are here: Home / guitar / Meet my band 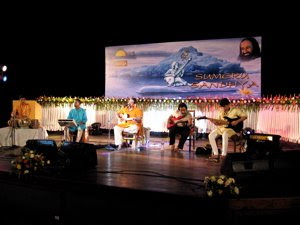 For the past year or so it has been my privilege to play with some of the most unusual and groovy rock and jazz musicians in the country. There are at least three distinct lineups that I play with on a regular basis, but I thought it’s time you all got introduced to my numero uno lineup, which is quite simply the most kickass band I have ever fronted.

Ajay Kadam (Tablas, Handsonic): Ajay is my right hand man, and is the glue that holds all of us together. An absolutely unflappable demeanour and an unshakeable groove, he is constantly the hub around which we spin our magic. A dedicated sadhak and a busy manager in an insurance company, Ajay expends practically all his casual leave on my concerts 🙂

Mizo Doss (Lead guitar, keyboard, arrangements): Mizo and I have been friends for almost twelve years, when he was playing guitar in Shiva, Kolkata’s legendary rock band. He now lives in Mumbai and composes music for albums, jingles, films and says he has become a computer programmer! Well, it’s awesome to have him back on guitar, playing everything from atmospheric chordal stylings, tasty octave comps, chiming c&w licks and of course all-out shred.

Chiro Lahiri (Drums): This hard-hitting groovemeister has played with everyone from Shiva to Krosswindz, and has endless live gigs and album appearances to his credit. Currently he also plays on Bikram Ghosh’s Rhythmscape project. Chiro’s octopads sound woody and rich, and he peppers our show with rim shots, bells and congas to complement his driving, thumping grooves. His energy spills over offstage as well, making him a constant source of entertainment when we travel!

Bumpy Nagchoudhury (Bass): Bumpy plays jazz, rock, Latin, funk, and even Carnatic — often in the course of the same song! A versatile and sensitive musician, he always adds a vital intellectual dimension to the simplest of tunes. In addition, he is always ready for a passionate discussion on matters metaphysical, musical and mundane, and usually has a fresh flavour of existentialist angst on each tour — no wonder the girls always fall for him.

But sorry, this is one band after Deep Purple where every member is happily married and pretty well domesticated 🙂