You are here: Home / Uncategorized / Coming unbinged: The story of my experiments with truth, food n samadhi

Sorry it’s not at all controversial, nor does it contain any spicy material or even spicy food for that matter; it’s just that the title was too good to pass up. That said, read on…

It began with a glass of coke (or pepsi or whatever, it didn’t matter to me then, though I can now tell them apart — and have grown to like thums up the best!)That was three years ago, on my honeymoon; and it was practically the first bottle of cola that I had drunk in my life.

I have been a healthy eater throughout my life, not by choice, but by design — I have a somewhat rare congenital condition that many refer to as “geographic tongue”. This means that I do not have a fully formed top layer on my tongue; it is deeply furrowed as though I spent my infancy chewing razor blades. The taste buds thereby are fairly exposed (or so I imagine) rendering me almost excruciatingly hypersensitive to all tastes — and particularly to spices. Even the slightest hint of extra pepper or ginger is enough to ensure that I leave my plate untouched at best, or at worst gasp for water with involuntary tears and hiccups galore.

The benefit this had was that it never allowed me to indulge in most of the sinful snacks which make life in India such a treat. Coupled with a steady exercise regimen, it ensured that I never put on excess weight throughout my life. 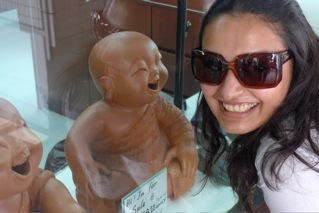 “Your first coke? Like ever?!!!” my hapless wife  was incredulous. As if it wasn’t freaky enough for her to have married someone who, when not crisscrossing the globe with a small suitcase, lived in an ashram, preferred chopsticks to spoons, loved his guitars more than his parents, and routinely spent two hours in silence each day!
(to be continued)
Sent from my iPhone